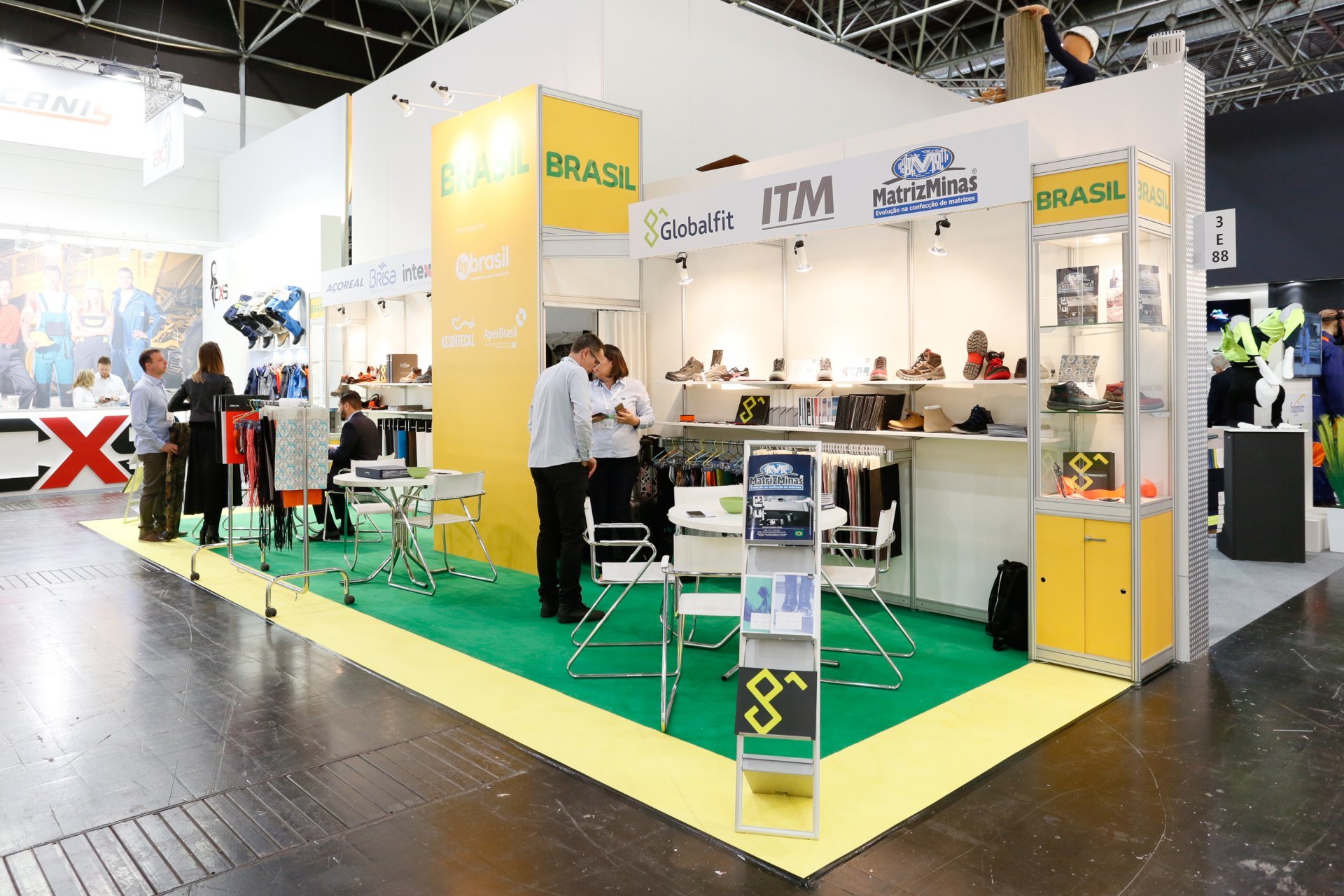 Share this news
Brazilian companies participate in the worlds leading security and safety trade fair
Mobilizing and representing the sector of components for leather, footwear and manufactured goods with initiatives for the competitive and sustainable growth of the companies participating in the By Brasil program: this is the role of the project, which is  promoting the participation of companies in the fashion components sector at another edition of  A+A, the largest worldwide trade fair dedicated to safety, security and health at work.
This activity is promoted by the By Brasil Components, Machinery and Chemicals project, an export-boosting initiative carried out in a partnership between the Brazilian Trade and Investment Promotion Agency (Apex-Brasil) and Assintecal. The action also relies on a partnership agreement with the Brazilian Association of Machinery and Equipment Industries for Leather, Footwear and Allied Trades (Abrameq), which represents the leather and footwear machinery vertical.
The companies that will be exhibiting at the fair are Flecksteel, IBTEC, Brisa, ITM, Matriz Minas, and Globalfit. Come visit us and get to know the innovation of Brazilian products at A+A.
The sectors participation serves to promote the technology vertical at the worlds largest fair for safety and security materials and health at work and is a way to enable Brazilian companies to meet international standards regarding the European requirements for this kind of material.  In addition, this participation at the Düsseldorf fair provides companies with the opportunity to enter the German market, which is a benchmark for the production of safety shoes and an important hub through which Brazilian products can reach the whole of Europe. Furthermore, it offers networking opportunities between Brazilian and foreign suppliers, thus strengthening relationships and generating new business possibilities for both countries, explained Ilse Guimarães, Assintecal s superintendent.
According to Ms. Guimarães, Brazil has increasingly become a global benchmark when it comes to fashion for the sector. Brazilian components feature originality through colors, materials and inspirations based on the country itself, its countless traditions and its cultural diversity. They are produced inspired both by nature  with an emphasis on Amazonia  and by Brazilian metropolises.
Currently, the By Brasil Export Program develops projects such as the Buyer Project, International Missions and Trade Fairs, and Sectoral Projects, which enable participating companies to expand their markets, strengthen relationships with potential customers, conduct business, gain knowledge on international processes, and have the possibility to meet international buyers.
Presently, the sector encompasses 2,667 industries in the fields of fashion components and technology, chemicals and machinery for footwear and tanneries. Their  products are supplied to a wide range of production chains, such as those in the footwear, furniture, textile, and even automotive segments.  This can be explained by the fact that products in the components sector are versatile and their scope of use is very broad. The major importers of Brazilian components are Japan, China, Argentina, Colombia, Mexico, Chile, Germany, Peru, Paraguay, and India.
About the German market
Considering Brazils total export sales in the first half of 2019  as regards components, chemicals and machinery for the leather and footwear industries -, Germany accounts for more than US$ 61 million worth of business deals.
In the first half of 2019 alone, German imports represented 11.3 percent of the sectors overall exports. In 2018, Germany ranked 10th among the top destinations of Brazilian exports. It imported eighteen products, especially uppers, leather chemicals, footwear components, insoles, textiles, and footwear machinery. In that same year, Germany consumed 440.1 million pairs of shoes.
About By Brasil Components, Machinery and Chemicals
www.bybrasil.org.br
www.facebook.com/bybrasilcc
Brazilian components manufacturers who are interested in expanding their trade relations with the foreign market are given the opportunity to participate - like other 300 companies - in the By Brasil Components, Machinery and Chemicals Project, which aims to encourage strong export performance, and as a consequence, improve the performance of the entire sector. The project is carried out by Assintecal, Apex-Brasil, and Abrameq. It offers appropriate solutions for every level of internationalization, providing companies with trade promotion, intelligence, and training, among others. For further information, please e-mail at relacionamento@assintecal.org.br.
About Apex-Brasil
www.apexbrasil.com.br
The Brazilian Trade and Investment Promotion Agency (Apex-Brasil) works to promote Brazilian products and services abroad, and to attract foreign investment to strategic sectors of the Brazilian economy. The Agency supports around 11,000 companies in 80 sectors of the Brazilian economy, which, in turn, export to over 200 markets. Apex-Brasil also plays a leading role in attracting foreign direct investment (FDI) to Brazil, by working to identify business opportunities, promoting strategic events and lending support to foreign investors willing to allocate resources in Brazil.
Share this news