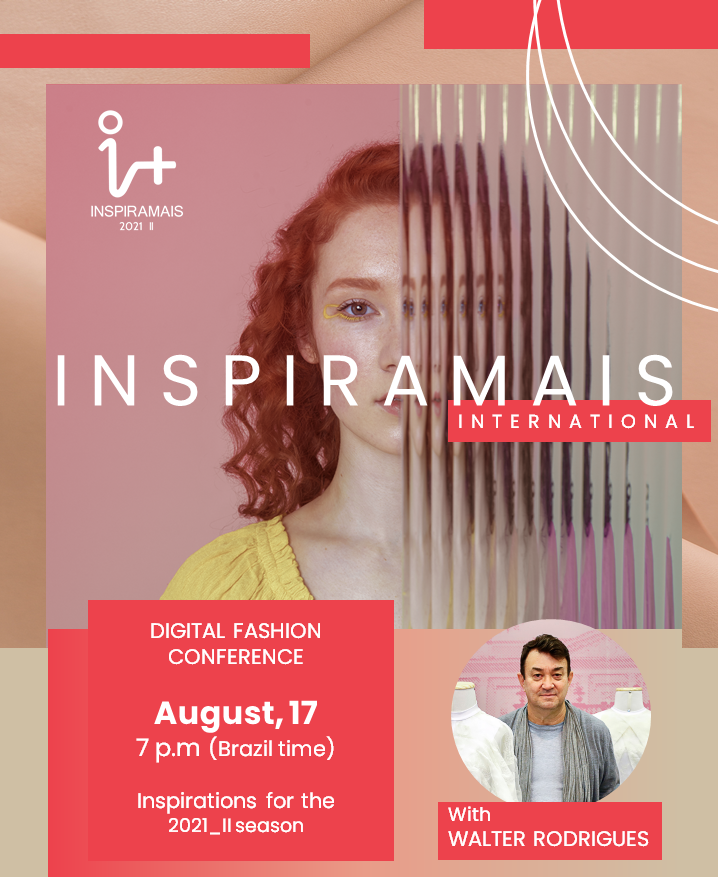 Share this news
Detailed research on colors, materials and techniques so that companies can be inspired and carry out more assertive production on the market.
The unique opportunity occurs on August 17, at 7 p.m. (Brazil time), when Walter Rodrigues celebrates the INSPIRATION CONFERENCE 2021_II FOR FASHION, which already presents the theme Free Spirit that will permeate all INSPIRAMAIS projects.
The conference will have simultaneous translation into English and Spanish.
REGISTER HERE: link
About the speaker:
One of the most applauded names in Brazilian fashion, Walter Rodrigues is a Brazilian designer and began his career in 1983 as a stylist at Revista Manequim - Editora Abril in São Paulo. In 1992 he launched a clothing brand that bears his name, he is the first Brazilian brand to participate in a Brazilian fashion week at Phytoervas Fashion in 1994. From 2002 to 2006 he participates in Paris Fashion Week. In 2012 he returned to work as a consultant in the area of ​​product design and is coordinator of the Inspiramais Design and Research Center, consultant at the Instituto By Brasil and curator of the Design Vision project at the Focus Institute.
INSPIRAMAIS occurs from August 25 to 27
The only one of its kind in Latin America, INSPIRAMAIS is known as a reference for the fashion market and is responsible for driving the creative process of the entire clothing, textiles, footwear, furniture, automobile, accessories and costume jewelery industry at the national and Latin American. that unify the language and methodology for the entire fashion production chain.
This year, the edition chose to keep the entire structure of projects and launches that mark the more than 10 years of the Hall of Innovation, but take everything to digital format. INSPIRAMAIS is aimed at professionals in the fashion production chain, the Salon presents a production based on unique references and inspirations, based on the Brazilian one and reflected in a vast research material developed by a highly qualified group of design professionals.
INSPIRAMAIS has the promotion of the Brazilian Association of Companies of Components for Leather, Footwear and Artifacts (Assintecal), of the Brazilian Association of the Textile and Clothing Industry (Abit), Center of Industries of Tanneries of Brazil (CICB), Brazilian Association of Indústrias do Mobiliário (Abimóvel), Brazilian Agency for the Promotion of Trade and Investment (Apex-Brasil), through the For Brazil, Components, Machinery and Chemicals project and the support of the country's main sector entities and partners, such as Abest, Abiacav, Abicalçados, In-Mod, IBGM, Instituto By Brasil (IBB), ABVTEX, Francal, Ápice, Jeans Wear Guide, Abrafati and Trans Rubber.
Share this news